The best animal product-free eateries in NYC and its hip suburbs.

Over half a million people in Britain are now following a vegan diet – never consuming any foods containing animal products including meat, fish, milk, cheese, eggs and honey.  For many, sampling a destination’s culinary identity is a major part of a trip. For vegans, some insider tips will help get the most out of the experience.

Meat may dominate the all-American menu, but great animal product-free food isn’t hard to come by in NYC if you know where to look.  Here’s a rundown of five local favourites, all in districts that are easy to reach by the subway.

In New York’s most famous gentrified neighbourhood, Champs Diner is hidden on a side street of a quieter part of Williamsburg.  This is a small retro diner that specialises in vegan alternatives to American comfort foods, served up by easy going hipster servers.

Don’t miss the Soltero Bowl, a dish piled to the brim with spiced quinoa, onions, mushrooms, peppers and crumbled ‘chorizo’ that will leave you feeling warmed and satisfied on a cold winter’s evening.  Or for breakfast (so good we went twice) the Hippie Hash Skillet – similar to my dinner but with tofu scramble mixed in.  Something sweeter? The S’mores pancakes on the next table looked fluffier and lighter than any pancake I’d seen – either side of the Atlantic.

Just around the corner, Dunwell Donuts picks up Champs’ brunchers who can’t be bothered to queue.  It’s NYC’s first ever all-vegan doughnut shop – but its point of difference isn’t obvious at first glance of their shopfront, website, or after tasting their bakes.

Serving only doughnuts, but with a variety of flavours and toppings, you can drink teas or barista coffee (including cold brew) with all your favourite milk substitutes. I tried the daily special, pumpkin spice, with an Americano latte – disappointingly missing the Horchatta Latte.  One bite into the oversized dessert brought all the flavours of autumn: cinnamon, ginger and nutmeg.  Ask for a brown bag to take your leftovers. 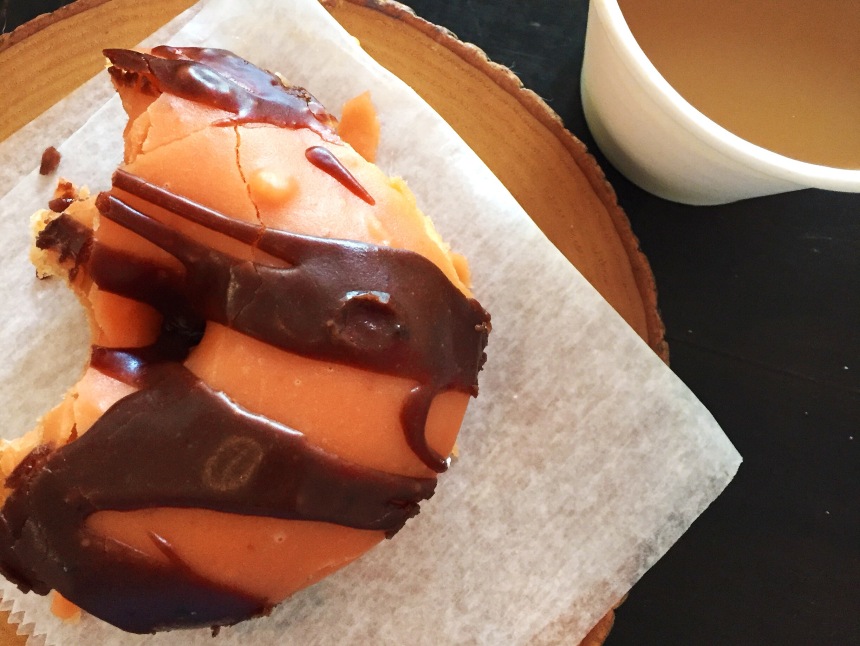 Self-professed ‘soy delicious’, Red Bamboo specialises in mock meat and seafood dishes. It has been open for almost 15 years in the basement floor of a street in Greenwich Village.  From its low key café-style interior you might never guess that it’s a favourite of Janet Jackson and Stevie Wonder.

Favourites of the regulars here are the Barbecue Buffalo Wings (formed from seitan) marinated in citrus barbeque sauce, or the barbeque ribs with comforting garlic mashed potatoes and gravy.

Insider tip: The building from the sitcom Friends is a five minute walk away if you’re ready for a constitutional after dinner.

No visit to New York City is complete without pizza.  Greenpoint is Brooklyn’s most northerly neighbourhood, with a gritty built-up appeal that sees new and old businesses located side by side on its wide streets.

Paulie Gee’s is known for its creative pizza, and serves up a full vegan pizza menu alongside its offerings for their omnivore friends. Its owner, Paul Giannone, is everything a British tourist would expect from an Italian-American –passionate about his craft, loud and welcoming.

They don’t take reservations, they don’t deliver, and they don’t allow substitutes on the menu.  Thankfully, the pizza was worth the wait, and it didn’t take too long for a table to come available.

We went for the classic Vegan Regina: tomato sauce, vegan mozzarella, fresh basil and a drizzle of olive oil cooked in a wood fired oven.  It delivered against its hype: a chewy and charred crust, sweet tomato with the right amount of cheese. Definitely worth the higher than average price tags.

Nestled just inside the Greenwich Village neighbourhood is the Peacefood Café serving the best sweet pastries in downtown New York.

Its welcoming shopfront is not unlike that of Central Perk in Friends, probably Greenwich Village’s most famous, yet fictional, café.  Inside its furnishing is more formal, with tables and chairs rather than comfy Chesterfields, catering to its later dining crowds.

Try the grasshopper cookie sandwich as an afternoon treat with a Brazilian nut chai to re-heat yourself after a day sightseeing in the cold.  These mint-choc, whoopee pie-type desserts could serve as a meal in themselves, and any omnivore would never guess they were vegan.

This article was written in December 2016. My target media was Times Travel Insider Guides. I’m not vegan but travelled with a vegan on that occasion. [WORDS 600].

I’ve finished spending my birthday gift vouchers! 📸 (Birthday was in June) ▪️ #birthday #instax #instaxmini #instaxmini9 #instantcamera #fujifilm #gift #present #scrapbooking #craft #photography
Happy new year and happy new decade everyone! I could do a 2009 vs 2019 but I won’t, just looking at the photos makes me feel 🤮. 🎉 It’s been a brill ten years. Finished two marketing qualifications and a postgraduate diploma in journalism, been promoted a few times, had my designs sold in Selfridges, travelled loads, made new friends, met @niallbache and had a Birdie! 🥳 The last year was a bit quieter than usual while we carried and got to know the little critter, but so excited for our adventures over the next years and years to come 🔮. 🎊 Hope everyone has a brill 2020! ▪️ #happynewyear #happynewyear2020 #newyear2020 #welcome2020 #happy2020 #2020newyear #newyeariscoming #newyearmood #newyearvibes #2020
Finally, finished. It’s a bit rough around the edges (not literally, the edges are pretty good) and it’s a bit late (wanted it done for Christmas) but I don’t think she minds on either. ✂️ I should probably start my Christmas crafts for next year now. 🧵 #crafty #craftymom #craftymama #craftygirl #craftychristmas #quilt #quiltsofinstagram #applique #appliquequilt #appliquedesign #leopardprint #customquilt #customquilting #personalizedgifts #personalised #imadethis #craftsofinstagram #imadethat #makeityourself #madeitmyself #makingthings #feelingcrafty #creativelifehappylife #feelingcrafty